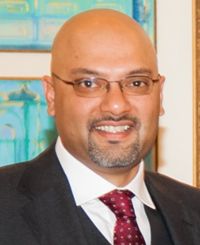 P.K. was born on October 22, 1976 in Bahrain where he lived before moving to Dubai at the age of 15. After finishing school, P.K. studied civil engineering at Clarkson University in Potsdam, New York. Upon graduation he joined Thalle Construction where he pursued his passion for engineering and enjoyed a flourishing career. Living so far away from home, P.K.’s colleagues at Thalle also became an extension of his family over the years.

P.K. was highly regarded for his professionalism in the community and also much loved for his kind and generous spirit by his family, friends, and colleagues. He was also known for his passion for soccer and ardent support for the Liverpool Football Club. In recent years, he channeled this love for the sport by coaching a group of budding, young players at soccer camp. He considered this as one of the happiest moments of his life.

P.K., beloved son of Shashi and Kanaya Nardhani, is also survived by his brother  Nikhil Nardhani, sister and brother- in-law, Hema and James Barrett, and niece Alithea Barrett, who was his pride and joy. P.K. will be deeply missed by all of those who were fortunate enough to know him.

A celebration of life will be held on Friday, May 15th at the Kentucky Dam Convention Center in Gilbertsville, Kentucky from 6:00 p.m. until 9:00 p.m. All family, friends, and co-workers are invited to attend.